Thursday, March 5th
at THE NEW VINTAGE
Doors open at 8 PM
$7, All Ages!
Advance online tickets on sale at http://www.ticketfly.com/event/784253-pile-wrists-waxeater-louisville/
Facebook invitation here: https://www.facebook.com/events/856590161030336
Recommended If You Like: Obits, Metz, Hot Snakes, Slammin’ in the back of your Dragula

PILE. The indisputable heroes of Boston’s burgeoning indie rock scene hardly need an introduction. The band’s name speaks volumes to most, and to the rest… it soon will. Earning the reputation of “your favorite band’s favorite band,” the quartet (Rick Maguire, Kris Kuss, Matt Connery, and Matt Becker) have been setting the DIY indie punk scene ablaze since 2009, developing a unanimously praised back catalog in the process and a legion of diehard fans throughout the entire country and abroad. The band have toured heavily over the years, playing all ages venues and basements in the spirit of DIY culture with peers Speedy Ortiz, Big Ups, LVL UP, Two Inch Astronaut, Krill, etc. as well as support shows with bands like Obits, Ex Hex, and Metz. Their new album, You’re Better Than This, comes out March 3 on Exploding in Sound.

The Wrists are a band from Louisville, which exploded on the scene with their first release, a cassette on AuralgamiSOUNDS in January. Consisting of Colin Kellogg, Jason Sparks, McKinley Moore, and Matt Filip, The Wrists are the most exciting new band around!

WAXEATER are “diggin’ through the ditches, burning through the witches, eatin’ pizza, taco-ing our riffs, having one dude named rob, riding in vanne frank, drinknig bourbon, gettin’ electrocuted, lovin’ america, havin’ a baby, poking smot, and slamming in the back of our dragula.”

Somewhere between punk and blues – a porch and an alley – lies Radiator King, the performing/recording name of Boston native and Brooklyn-based Adam Silvestri. Established in 2011, Radiator King’s music shows influences from both Dylan and Strummer with a sound described by Boston blog Allston Pudding as something akin to what “Tom Waits locked in a room for a month with nothing but a copy of Springsteen’s Nebraska” might produce. Whether alone with a guitar or backed by a band, Radiator King embodies the raw energy of punk, the grit and intricacy of Delta Blues, and the lyrical potency of folk in “songs that are the sonic equivalent to an old whiskey bar at the end of a dirt road.”

An evening with HELMET, performing 2 sets: playing the entire “Betty” album from start to finish followed by a second set spanning the entire catalog.

Two Sets by the JAVA MEN 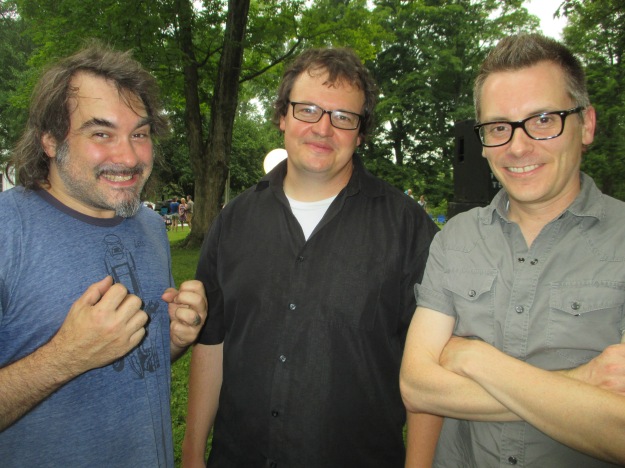 Todd Hildreth, Craig Wagner and Ray Rizzo formed JAVA MEN in 1992 when Wagner and Rizzo were still students at Bellarmine University (then Bellarmine College). JAVA MEN developed from the classic jazz/soul organ trio arrangement of organ, guitar and drums, encompassing post-rock, hip hop textures, and bluegrass in the their original compositions. The band self-produced 3 recordings (“A Letter To St. Paul”, “Void” and “Orbituary”) and shared bills with The Rachels’, Victor Wooten, and The Brian Setzer Orchestra. Individually they have been part of other great Louisville music groups including Liberation Prophecy, King Kong, and The Ron Jones Quartet.

Craig plays with the aforementioned Liberation Prophecy and with Carly Johnson. He and Carly recently won the LMA’s “Jazz Artist Of The Year” Award. He is also part of the jazz faculty at both the University of Louisville and at Bellarmine.

Todd leads the bands Squeezebot and the Todd Hildreth Trio, and currently plays with King Kong and Vgroove. He is part of the music faculty at Bellarmine University.

Ray lives in Brooklyn, New York where he is part of the bands Mesiko and Corporal, and often plays with Trixie Whitley. He has recorded with members of the Lounge Lizards, Glen Hansard, Trixie Whitley, Frogbelly and Symphony, Dawn Landes, and Yo Yo Ma (on the Grammy winning “Songs of Joy and Peace”).