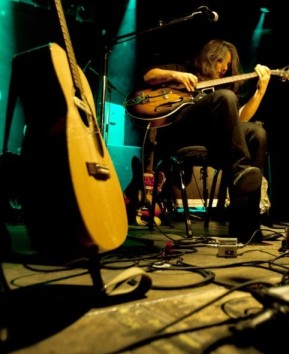 Combining  boundless creative imagination with a deep reverence for American folk, blues and country music, MARISA ANDERSON‘s guitar playing is fluid, emotional, dexterous and original. Signal to Noise magazine calls Anderson’s guitar work “Utterly fabulous”, TIme Out London refers to her playing as “Stunning…haunting and evocative”, Pitchfork calls her latest record, ‘Mercury’,  ”Brilliant” and Wire Magazine says, “Her sound has strength in restless variety…Anderson’s playing is heartfelt and utterly American, free from grandstanding and steeped in respect for the old tradition.” Before going solo in 2009, Anderson played guitar in the Dolly Ranchers and the Evolutionary Jass Band. In the past two years, Anderson’s music has landed her festival appearances in Europe and the United States and opening slots for artists including Godspeed You! Black Emperor, The Devil Makes 3 and Sharon Van Etten. In August 2013, KBOO Community Radio released a split 7″ featuring Anderson and Elizabeth Cotton. Anderson’s music has been featured on NPR and on soundtracks including ‘Smokin’ Fish’, ‘For the Love of Dolly’, ‘Girls Rock’, and ‘Gift To Winter’. Her writings on music and activism  have appeared in Bitch Magazine, Leaf Litter, and in Rock ‘n’ Roll Camp for Girls, the book. Her new album, Traditional and Public Domain Songs, is now available from the Grapefruit Record Club.

For WOODEN WAND‘s new album Farmer’s Corner, James Toth decided to try something different: instead of spending a week in a studio with the same people, the same engineer, the same equipment and the same state of mind, he would record in fits and starts, whenever – and WHEREever – he felt like it, recording new songs as he wrote them. Over six sessions in four studios spanning three states, he began amassing tracks. Toth then chose his favorite ten songs for Farmer’s Corner, which is, remarkably, the very first self-produced Wooden Wand album. Toth is abetted on the majority of the tracks by electric bassist Darin Gray (On Fillmore, Jim O’Rourke, Grand Ulena, Dazzling Killmen), and guitarists William Tyler (Lambchop, Silver Jews, Yo La Tengo) and Doc Feldman. Toth also called on friends in St Louis, Nashville, and his current home in Lexington, KY to produce an album that splits the difference between the protracted psych of his work with the Vanishing Voice and the World War IV and the more lonesome, bucolic styles of his more recent albums with Michael Gira and the Briarwood Virgins.  The result is the most “Wooden Wand” album in the Wooden Wand discography, reflecting Toth’s omnivorous musical and narrative obsessions. The arrangements — think Little Feat covering Neil Young’s Harvest Moon — only serve to highlight his capabilities as both a songwriter and storyteller. The collected songs form an easy entry into the ever-growing Toth output, where outlaws on the run, epic landscapes, endless travels, agitated insomniacs and ditch-digging memory-evaders lurk behind every turn.