Cropped Out and The Other Side of Life are proud to present:

A BENEFIT FOR TOM CARTER

While on a tour of Europe this spring with his band Charalambides, the Brooklyn based guitarist Tom Carter was hospitalized in Berlin, Germany for serious complications of pneumonia. In mid-July, Tom was transferred to a medical rehabilitation facility in Germany, near the Baltic Sea. Tom will receive medical care, monitoring and physical rehabilitation at the facility until the end of July. His doctors are also recommending that Tom not return to employment and normal levels of pre-illness activity until January 2013. This recommendation will be periodically reevaluated, but it seems to fall in line with common recovery projections for people who have experienced pneumonia at this level of seriousness. It is still unknown whether Tom will be able to return to New York immediately after the rehabilitation, or if it will be necessary for him to, instead, reside elsewhere with his family for a time. Although his condition continues to improve, Tom is still weak and his condition must come closer to what his normal baseline health will be, in order for doctors to assess what type of further treatment he will need in the US. It does seem to be certain that Tom will require follow up care once back in the States.

WHY YOU SHOULD CARE:

Tom Carter is a tremendous musician, and a caring, compassionate individual who will need long-term help to recover from his illness. Cropped Out, The Other Side of Life, and the musicians playing the benefit are joining forces with a number of promoters, musicians, and concerned friends of Tom all across the South to curate benefit shows during the middle of August. This unique situation of multiple forces across an entire region presents a rare opportunity to help a friend who has given us so much over the years — his music, friendship, and encouragement. 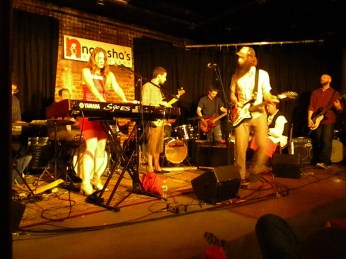 (Photo of Sapat by Ginger Goss, from Loin Seepage.)

Spawned from the formidable Louisville, KY collective known as Black Velvet Fuckere, SAPAT resides as the centrifugal force in this Midwestern psychedelic madrigal set in the psychosexual backwaters of the mighty Ohio River. For the entirety of the ‘00 decade, members have kept busy collaborating with and/or massaging the egos of various and sundry avant-pontiffs such as Robert Fripp, Magik Markers, Dead Child and Eugene Chadbourne – when not honing the orgone energy of SAPAT.

TROPICAL TRASH have caused quite a stir with their new 7″, Fear of Suffering, on Sophomore Lounge. Still Single describes TROPICAL TRASH as an “Excellent combination of thrashing energy and solid ideas that break apart and recombine in novel, tuneful ways.” They’re just as thrilling live as on record, so don’t miss this opportunity to rock out with ’em!

SHEDDING has been a solo vehicle for Connor Bell since 2001, and has released several items over those years available at Ocio and Hometapes. SHEDDING‘s music is meditative and still, eerie and unsettling — yet with a spectacular sense of melody.

Check out helptomcarter.org to see other ways that you can help contribute to Tom’s recovery!

UPDATE, 8/17/2012: Hey Louisville! We raised $475 last night to benefit Tom Carter and help with his recuperation from pneumonia. Thanks again to everyone who attended, played, or otherwise helped with the benefit, and thanks again to Zanzabar for hosting it.