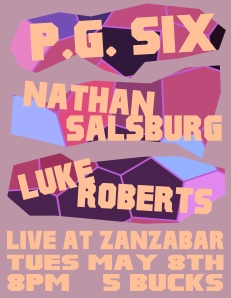 Cropped Out and the Other Side of Life are proud to present:

P. G. SIX is the moniker for Pat Gubler, former string man with the Tower Recordings, and current solo artist for Drag City, who released his fourth solo album, Starry Mind, last year. He’s touring with a full band, which features Bob Bannister and Robert Dennis (both of Fire in the Kitchen and Tono-Bungay), and this show will be his Louisville debut. Don’t miss it!

NATHAN SALSBURG is an archivist, producer, guitarist and writer based in Louisville, Kentucky. He has worked for the Alan Lomax Archive since 2000, for which he currently serves in the capacities of production manager, photo and video archivist, and general digital catalog editor. Since 2006 he has produced and hosted “Root Hog Or Die,” a vernacular/traditional music program on East Village Radio, and is curator of the Twos & Fews recording imprint, also a vernacular music entity, and a collaboration with Chicago’s Drag City label. SALSBURG maintains an index of on-line vernacular music resources at his blog, roothogordie.wordpress.com, and contributes occasional music writing to the Louisville Eccentric Observer and the Other Music weekly update. Last August, the Tompkins Square label released Avos, a collaboration between SALSBURG and Chicago guitarist James Elkington (formerly of the Zincs), and SALSBURG’s first solo album, Affirmed, was released last November on No Quarter.

In the year since LUKE ROBERTS recorded his debut Big Bells and Dime Songs a lot has changed. Luke now owns a guitar that his sophomore album was written on, he has moved from Brooklyn to Montana to Nashville, his childhood home, and the songs were written over a long period of time in his Brooklyn apartment (as opposed to largely on the bus down to the studio on the debut). The combination of changes made a significant and noticeable impact on the songwriting and arrangements found on The Iron Gates at Throop and Newport , recently released by Thrill Jockey.

To join our email list, send an email to hstencil@gmail.com.